Candies feedback is a tool we use at our Barcelona office to foster a culture of feedback and continuous improvement for teams and individuals.

ss is simple: every 6-8 weeks every team/department in the office ranging from scrum teams to Finance or Client Services have a few days time frame to give feedback to each and every other team, in a public and transparent way, with this format:

The reason why we chose to use candies was to avoid any reference to money which could deviate attention from the feedback part. This exercise has nothing to do with performance review.

In this example the Lion team should give away a total of (5+8)=13 candies to Capricorn and Gemini in this edition.

In this example, in this edition the Lion team chooses to move two candies in favour of the Gemini team, perhaps because their contribution to the organization’s goals or to the Lion team’s goals has been a great one (or maybe because Capricorn team’s contribution has been lower than expected).

Once the round of feedback is closed, every team receives a full report of all the feedback that the other teams have given to them, plus the sum of candies:

In this example, the Lion team receives (6+8)=14 candies (something’s going on between Capricorn and Lion, these two teams don’t get along well together…)

Not only each team gets to know what the others say about them: everyone can see everyone else’s feedback and amount of candies, that is, what is said during each edition is completely public and visible to everyone in the office.

Lastly, a big bowl of real and yummy candies is available for all teams to take their part as resulted in the feedback round. 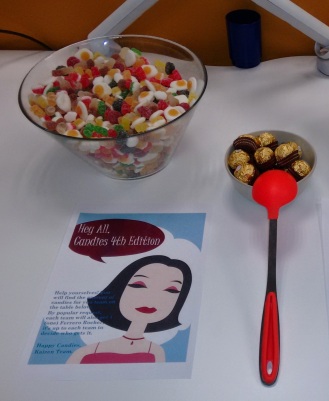 We have run a dozen editions of this experiment in our office. We started with a cheap and disgusting excel spreadsheet and later on developed our own application for that. But what we did not compromise on was office-wide participation: since day one we asked all teams in the office to enter feedback. Most people first reacted to this new experiment just by ignoring it. When urged to complete feedback before the due date, many said things like “We have real work to do” or “I have nothing to say because I do not work with anyone else in the office”. Getting a full round of feedback from everyone was a very tough task at the beginning, as we had to face big resistance to this novelty.

The first edition results caused big shock to some: the very fact that results were public, even if largely advertised beforehand, generated panic reactions in some teams, and a big “Hallelujah” in others.

Over time, teams got used to this exercise and peer pressure started to build up: teams who did not take the exercise seriously or did not give feedback were urged by other teams to do so, taking a load off the organizers’ minds. The “I don’t know what others do” excuse however kept going on for a while. We addressed this in two ways: by asking the complainers to get out of their silos and ask, and by asking the complainees to give visibility of what they do with presentations, demos and other ways of being transparent.

High frequency has been a concern for some teams for a while. We started with a 4-week cadence and after several rounds of feedback on the exercise itself we reduced it to 6 weeks and then to 8 weeks. The key was to create the habit first, and then to start including changes. As of now, we are considering to run the exercise on demand.

One to one phase

Thanks to their inclination to self-management, our scrum teams have taken this game to its next level: at the end of every edition they share between their members all the candies that team has received with same feedback-based mechanism. In the previous example each Lion team member has (14/7)=2 candies to completely give away among the other team members:

In this example, Wonder Woman has had a great edition, while Flash has something to improve according to his own teammates. As per the team phase, we deem very important that real and actionable feedback is given together with the candies.

We deem very important that real and actionable feedback is given together with the candies.

Over time we have applied some changes to the original concept to answer to participants’ feedback about their experience with this game:

One thought on “The Candies Feedback experiment”